When I was in college choosing my career, all I cared about was: how much money could I make? So I chose investment banking. And I quit after 6 months. But anyway. Most of my peer group chose their careers because of money. It wasn’t always like this. Back in the 60s, we had just landed on the moon. Einstein and Edison were the celebrities of the day. People wanted to be inventors, explorers and scientists – altruistic callings that would push forward the envelope of human progress. Nowadays people want money – financial security. What happened to changing the world? Altruism? Most people are not working on solving meaningful problems. Millions are dying in Africa. Our best and brightest proceed to go work in finance or tech or whatever industry is the most cashed up. 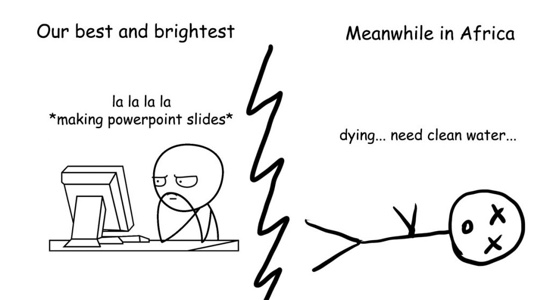 Being the richest man in the cemetery doesn’t matter to me. Going to bed at night saying we’ve done something wonderful that’s what matters to me. – Steve Jobs

Here’s the thing: solving the world’s biggest problems is the best way to make money. This makes sense from an economics perspective. If you create the most value then the market will reward you with the most money. But wait, how the hell would altruism, like working to solve poverty in Africa, make more money than being an investment banker? Banking appears to be a steadier path to making more money – if we view things from a short term perspective. But what about in 10 years, 20 years and more?

Let’s say you start a social enterprise in Africa. In your first year you make nothing and your banker friend makes $150k. In 10 years, your social enterprise does well enough for you to live comfortably. Meanwhile your friend is making $2m as a director. You wonder if you made the wrong choice. But in 20 years, Africa grows rapidly, income levels rise 20x to western levels. Business is booming because your customers can afford to pay you western prices. Everyone now wants to invest in Africa. Multinationals are in a bidding war to buy your company. The land that you brought for ten thousand dollars per hectare is now worth a one million dollars per hectare. You are now worth over $100m. Meanwhile the world realizes investment bankers are basically glorified real estate agents – annoying and unnecessary. Bankers and real estate agents get replaced by a super efficient AI marketplace and your friend is made redundant. 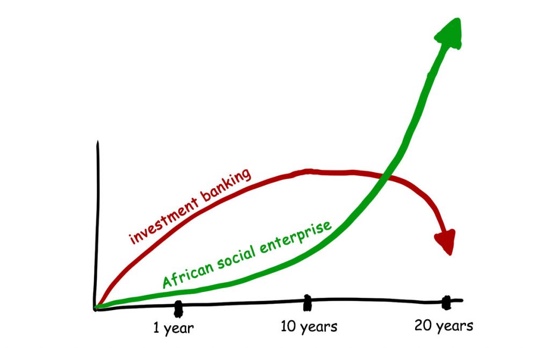 Sure, trying to solve big complex problems is hard. People say that 9 out of 10 new ventures fail. Well, what if you tried 30 times? It’ll take about 4 months to see if a venture will work out, so you can try 3 new ventures a year. If you work on it for 10 years, you’ve tried 30 different ventures and you’re basically guaranteed success.

How I got over risk of starting my own business was, I said to myself: even if I tried for the rest of my life and I died trying, would I be happy? Yes, because I enjoy the process of trying to change the world, problem solving, and working on something I find meaningful. I can’t control if I will succeed or not. What matters is that I tried.

It is not the critic who counts; not the man who points out how the strong man stumbles, or where the doer of deeds could have done them better. The credit belongs to the man who is actually in the arena, whose face is marred by dust and sweat and blood; who strives valiantly; who errs, who comes short again and again, because there is no effort without error and shortcoming; but who does actually strive to do the deeds; who knows great enthusiasms, the great devotions; who spends himself in a worthy cause; who at the best knows in the end the triumph of high achievement, and who at the worst, if he fails, at least fails while daring greatly, so that his place shall never be with those cold and timid souls who neither know victory nor defeat. – Theodore Roosevelt

Imagine at the end of your life, you realized that you never gave your dream a try. You just let it slip past. How would you feel?

When I was 17, I read a quote that went something like, “If you live each day as if it were your last, someday you’ll most certainly be right.” It made an impression on me… and since then, for the past 33 years I have looked in the mirror every morning and asked myself, “If today were the last day of my life, would I want to do what I’m about to do today.”

And whenever the answer has been, “no” for too many days in a row, I know I need to change something. Remembering that I’ll be dead soon is the most important tool I’ve ever encountered to help me make the big choices in life.

Because almost everything: all external expectations, all pride, all fear of embarrassment or failure… these things just fall away in the face of death… leaving only what is truly important.

Remembering that you are going to die is the best way I know to avoid the trap of thinking you have something to lose. You are already naked. There is no reason not to follow your heart. – Steve Jobs