Perseverance - you can and you will

It’s great to make plans, to put together to-do lists, and to visualize all of your big goals and dreams… This is an important first step towards accomplishing them.

But planning alone isn’t going to get anything done.

Planning is a framework that helps you understand what needs to get done in order to accomplish your goals, but perseverance is what gets you across the finish line.

When starting something new, it’s easy to grind and optimistically push forward. Planning gives us a sense of accomplishment, but it only takes a few minutes to make a list of everything you need to do. It takes much longer to actually complete these things.

What makes this even trickier is that after making plans, or talking and thinking about what you’re going to do, our brains sometimes confuse that with actually getting those things done, and reward us mentally even thought we haven’t accomplished those goals. This creates an extra obstacle to get past, but you can do it.

Perseverance is the skill that turns all of this hopeful optimism and planning into concrete results.

Perseverance doesn’t mean that you get the ball rolling and cruise off of the initial high, or that you keep up the momentum when things are easy… it refers specifically to overcoming the challenges you’ll meet along the way.

And if you’re doing something that’s worth doing, you will meet challenges along the way. You need adversity in order to showcase your perseverance.

There are various schools of thought around how to push through this resistance. Here’s an excerpt from a larger piece on work ethic, with some helpful thoughts and advice about how to persevere when the going gets tough.

It’s easier to commit 100% to quitting than to smoke in moderation. Because you don’t have to make the decision anymore. Otherwise you’ll be like ‘today’s an exception, my friends are smoking,’ everything becomes an exception.

Do not make a backup plan.

Plan B only distracts you from plan A.

It's Plan A or die trying

When the ancient Greeks got to Troy the first thing they did was burn the boats. So the only way they could survive was to attack Troy, plunder the city for materials, and then build the boats they needed to go back home.

I am not afraid to die on a treadmill. I will not be outworked period. You might have more talent than me. You might be smarter than me. But if we get on a treadmill together, there’s two things: You’re getting off first, or I am going to die.

When I started my first business. A big reason why it succeeded was because I had no other option. I dropped out of university. I’ve been fired from two companies already. And they were internships. Like who gets fired from an internship? I realized I was unemployable. My business had to succeed. It was succeed or die trying.

One year into my business and things were not going well, we weren’t making money, and the investors wanted their money back. I thought about quitting, but I couldn’t, I was unemployable. So I kept going. I moved in with my parents and lived on $200 a week. I worked my ass off, tried lots of different things, and after 8 months the business started taking off. I succeeded because giving up was not an option.

Being successful at anything looks a little like this: 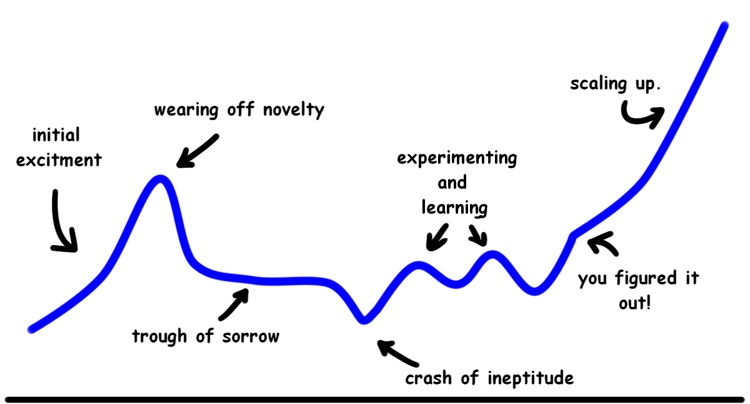 First there’s excitement as you start something new, you’re learning quickly, everything’s fun. Then the novelty wears off. Your progress stops. There’s no more easy gains. There’s big challenges to overcome. You’ve reached the plateau of sorrow. You might not make progress for months. But if you keep experimenting and trying new tactics, eventually you work it out, and you make massive progress in a short amount of time. Progress is not linear – it comes in spurts.

Never quit something with great long-term potential just because you can’t deal with the stress of the moment.

The key to getting through the plateau of sorrow is to:

It’s not about achieving a result. The reward is the work itself. 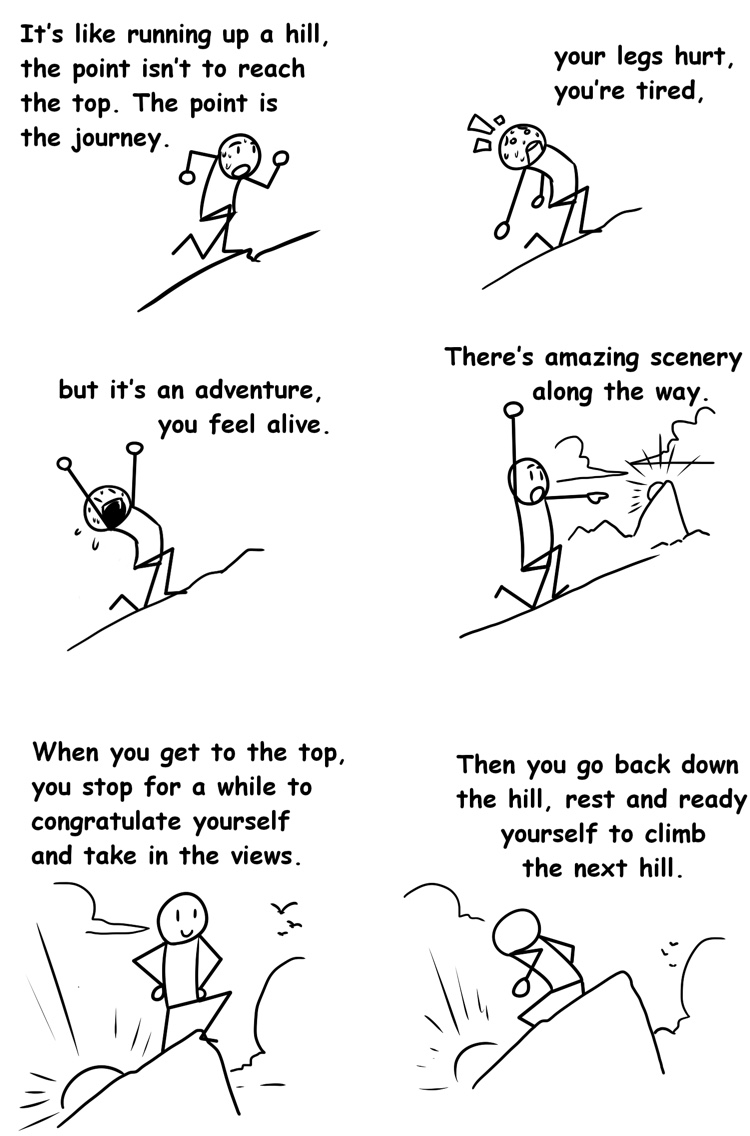 It’s the same in life. We will all die someday. So what does it matter what we accomplish? Or how much money we make? All that matters is: did we have fun along the way? Did we make some good memories?

People think success in life is measured by results. Take Muhammad Ali. Sure, it’s glorious when he wins a fight. Ali lifts the trophy, and the crowd roars. He is crowned “the greatest.” But what few people realize is:

The fight is won or lost far away from witnesses – behind the lines, in the gym, and out there on the road, long before I dance under those lights

The fight is won by long nights pounding punching bags. Nobody is around except for Ali. Left hook. Right hook. Practicing his punches over and over again. This is what success sounds like. Pound. Pound. Pound. Making 0.001% improves each time. The slight smile on Ali’s face every time he makes a small improvement. This is what success looks like. 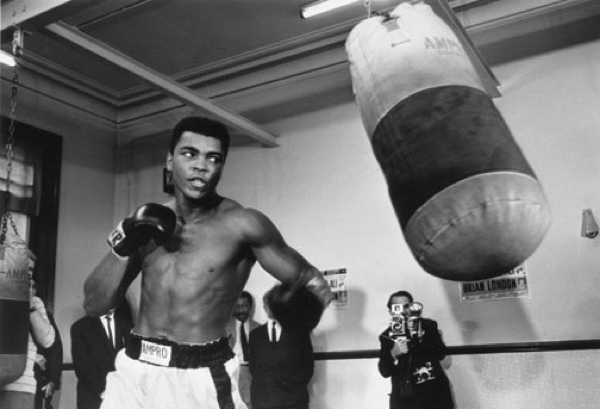 Success is a humble set of tasks repeated every day. Making the choice to eat good food. Doing 20 minutes of quiet meditation a day. Working consistently for 2 hours each morning on your most important task. Doing it over and over again.

The essence of boredom comes in the obsessive search for novelty, satisfaction lies in mindful repetition, the discovery of endless richness in subtle variations on familiar themes